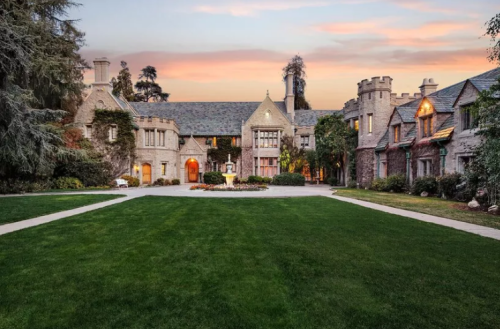 At the top of the market, LA’s luxury homes are asking heart-stopping prices. Last year, the Playboy Mansion listed for $200 million, while a spec mansion on the site of an estate once owned by Barbra Streisand hit the market for $150 million, as did Owlwood, the pedigreed estate that once housed Sonny and Cher. Where do these listing prices even come from? Some experts say they’re more or less shots in the dark.

“A lot of these asking prices are made-up numbers rather than being based on any comps,” Miller said. “It’s probably more common than we realize, because everybody is fixated on the top line number and not how the sausage is made.”

In fairness, part of the inventiveness with price tags comes from the fact that it can be pretty tricky to find anything remotely comparable for some of these unique, high-end properties.

Built in 1927, the Playboy Mansion spans 20,000 square feet and has 29 rooms, 12 bedrooms, and a four-bedroom guesthouse with its own solarium. It was built for Arthur Letts Jr., the son of department store mogul Arthur Letts, who was the original developer of Holmby Hills. The property also has its own private zoo license. It ultimately fetched $100 million (the buyer was its neighbor Daren Metropoulos, co-owner of Hostess Brands).

Selling for a still-high but under-listing price amount is often the fate of these high-priced properties. The spec house with a Streisand connection sold for $100 million in an unusual deal where payment was a combination of land trades and cash. The Owlwood estate that Sonny and Cher once called home, also listed for $150 million, ended up selling for $90 million.