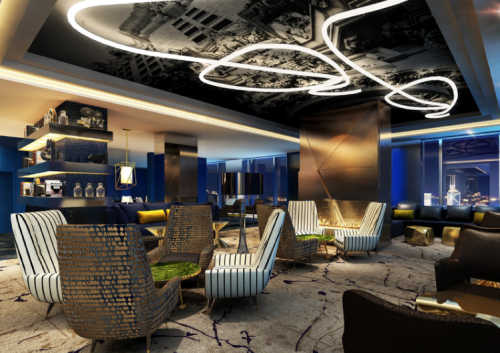 The Downtown Los Angeles megaproject Metropolis is more than luxurious condos. It also holds the 18-story Hotel Indigo, a 350-room inn with a top-floor cocktail lounge and a ground-floor eatery.

It’s scheduled to open March 2, 2017, and we just got our hands on some new renderings.

The Indigo’s interiors, designed by Hirsch Bedner Associates, weave together elements from Los Angeles’s history, starting with the late 1800s through the 1920s and incorporating nods to the early days of the movie industry, vaudeville, and Prohibition-era speakeasies and tunnels, says a release from Hotel Indigo.

Guestrooms are inspired by old-timey film stars, with a focus on Anna May Wong, the first Chinese-American movie star.

Hotel Indigo is the boutique arm of the hospitality giant InterContinental Hotels Group, which is also locked in to operate the hotel in the under-construction Wilshire Grand. The West Coast’s tallest tower, the Wilshire Grand is scheduled to open less than a week after the Indigo, on March 8, 2017.