Hollywood Palladium, at center of development battle, is officially a landmark 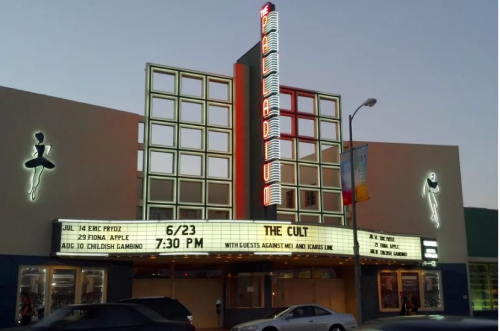 The Los Angeles City Council has granted the Hollywood Palladium landmark status, an honor that says the venue—which has not only hosted all types of bands from swing to metal, but presidents and high school dances, too—is worthy of preservation.

The Beverly Press reports that the designation was awarded last week, and, the local newspaper points out that the status will ensure any future changes to the building, which opened in 1940, are subjected to strict guidelines.

A developer already has big plans for the Palladium and the land that surrounds it.

Developer Crescent Heights has the OK from the city to restore the historic venue and construct a pair of residential towers with more than 700 apartments right next to it on Sunset Boulevard. But those plans are on hold as the city fights a lawsuit brought by the AIDS Health Care Foundation, which alleges the city council violated the California Environmental Quality Act and the city charter in approving the residential high-rises.

The foundation, whose offices are located across the street from the Palladium, is also bankrolling a March ballot measure to freeze most major development projects citywide.