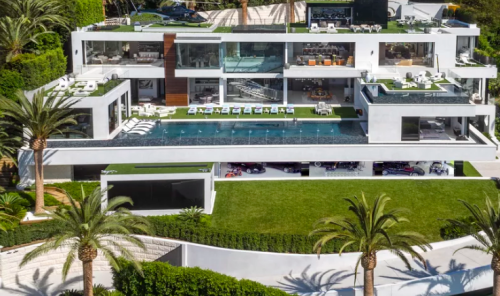 The Bel Air spec mansion is listed for $250 million

With a $250 million asking price, this freshly completed Bel Air megamansion is now the most expensive residence for sale in the U.S.

If sold anywhere close to full asking price, the palatial spec home would easily surpass an 18-acre Hamptons estate that sold for $147 million in 2014 for the title of priciest property in U.S. history.

According to The Hollywood Reporter, the 38,000-square-foot home was developed by handbag magnate Bruce Makowsky, who recently sold another extravagant spec house to Minecraft creator Markus Persson for $70 million.

Will it be enough to capture Jay Z and Beyonce’s interest after the couple reportedly lost out on the home eventually purchased by Persson? That’s anyone’s guess, but $250 million might be a little pricey even for their standards. In fact, Makowsky tells the Reporter, there are likely only about 3,000 potential buyers worldwide.

Of course, the developer would prefer to sell to someone in the neighborhood.

“I would love for the buyer to be someone from California,” Makowsky told the Reporter. “[M]aybe a Geffen or a Spielberg.”

Other features of the 12-bedroom home include a spa room, infinity pool, auto gallery filled with Lamborghinis; Ferraris; and the like, and the helicopter featured in the 1980s TV show Airwolf (though, disappointingly, you can’t actually fly it). There are also 21 bathrooms.

Like that Beverly Hills mansion, Makowsky’s latest real estate venture looks a bit like something Ferris Beuller might have designed had Cameron’s father spotted him some capital. Notable features include a bowling alley, a wall of candy dispensers, an array of glass foosball tables and chrome skateboard sculptures, and a James Bond-themed movie theater.