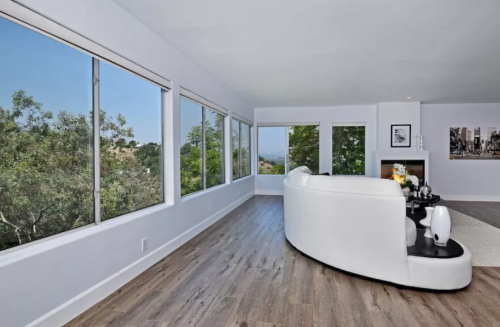 Perched atop a hill in Sherman Oaks, this two-bedroom home is one of 20 stilt homes that influential architect Richard Neutra designed toward the end of his life. Given his philosophy of bio-realism and desire to integrate his designs within the surrounding environment, Neutra chose to suspend the homes over the hillside rather than building retaining walls or otherwise disturbing the terrain. The result is a series of homes that seem to defy the laws of gravity, supported mainly by a network of long poles extending from the hillside. This might seem like a recipe for disaster given the hotbed of seismic activity that is the Los Angeles area. So far, though, the homes have weathered more than four decades of variously sized earthquakes without incident.

The interior of this particular home appears to have been significantly remodeled since its construction in 1966. Per the listing, the bathrooms, floors, lighting fixtures, and doors have all been recently updated. The kitchen is also sporting some new appliances. By far, the home’s most impressive feature is the long panel of windows in the living room, and the terrific views that they provide.

The 1,655-square-foot home also offers a generous amount of outdoor space, with a series of decks and patios that nicely incorporate the surrounding vegetation. Asking price is $1.095 million.