Slash is Selling His Very Slash-Like House in Mulholland Estates 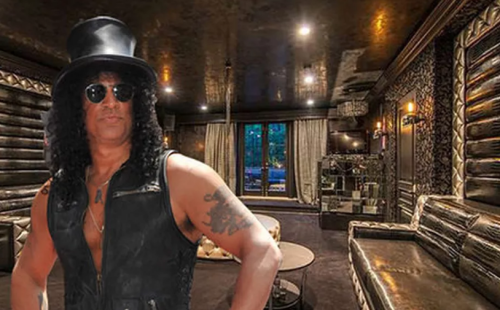 Thank you to Slash of Guns N’ Roses for not disappointing us with a boringly out-of-character house like some musicians we can think of. His house in Mulholland Estates—in the northern reaches of the 90210 zip code and technically in Sherman Oaks—is full rock star: pirate ship chandeliers next to a sexy pirate statue that’s probably from SkyMall, entire rooms done in leather, tufted velvet galore, a nightclub with DJ and photo booths, a tiny little skate ramp, a recording studio, and a drapery-laden canopy bed that looks perfect for pointing to while you tell a Cribs camera that “This is where the magic happens.” There are also two two-car garages, multiple wetbars, a library, a playroom, a screening room, an outdoor living room, organic vegetable garden, and pool and spa, and a total of seven bedrooms and seven and a half bathrooms, all on nearly half an acre.

Slash bought the house in 2009 for $7.3 million; he and his wife announced late last year that they’re getting divorced, and now comes the real estate sell-off—the house has just been listed for $10.995 million.